Kick-off meeting of the Twinning Project "GATHERS – Integration of Geodetic and imAging TecHniques for monitoring and modelling the Earth's surface defoRmations and Seismic risk" will be held on December 4th-5th, 2019 at Wrocław University of Environmental and Life Sciences (UPWr).

more...
New microwave radiometers in IGG
05-11-2019
Within the EPOS-PL project (POIR.04.02.00-14-A003/16) two microwave radiometers RPG-HATPRO-G5, supplied by Radiometer Physics GmbH, were purchased. The instruments were installed on the building of the Faculty of Environmental Engineering and Geodesy of the Wrocław University of Environmental and Life Sciences and in the Geodetic-Geophysical Observatory Borowa Góra. RPG-HATPRO series develops microwave radiometers designed for continuous measurement of temperature and humidity profiles in the troposphere, parallely in several selected frequency channels.

A new model of laser beam delay in the atmosphere
11-09-2019
When performing Satellite Laser Ranging (SLR) to artificial Earth satellites, the laser beam passes through the atmosphere twice: from station to satellite and after reflection from the retroreflector from the satellite to the ground station. The laser beam is delayed each time by several up to several dozen meters. The delay occurs primarily in the lowest layer of the atmosphere - the troposphere - and depends to a large extent on atmospheric pressure, and to a lesser extent on the content of water vapor, temperature and carbon dioxide concentration in the troposphere.
The current tropospheric delay models take into account only meteorological measurements performed at laser stations along with measurements of distances to satellites. Currently used models assume full symmetry of the atmosphere above the stations, which leads to systematic errors and degradation of registered ranges in all laser measurements.
Team of scientists from IGiG UPWr. and GFZ Potsdam jointly developed a new model describing how the laser beam is delayed in the atmosphere taking into account the asymmetry of the atmosphere. This is the first model of this type, which is based both on the use of meteorological measurements at stations to calculate the delay towards the zenith, and on numerical weather models to determine the oblique delay towards the satellite because then the laser beam passes through different layers of the atmosphere. For example, the troposphere layer above the equator is much thicker than above the poles, thus the dominant parameter describing the asymmetry is the northern gradient of the tropospheric delay. The developed model also takes into account local conditions around laser stations, e.g. terrain (in mountainous terrain) or the vicinity of water reservoirs.
The laser beam behaves differently in the atmosphere than the electromagnetic wave in the microwave techniques used in Global Navigation Satellite Systems (GNSS) or Very Long Baseline Interferometry (VLBI). In the case of microwave observations, atmosphere asymmetry models have been used for several years. However, laser observations are about 70 times less susceptible to delay due to water vapor content in the atmosphere than microwave observations, while the hydrostatic delay is greater in laser observations than in microwave observations. On the other hand, laser observations can only be made under a cloudless sky, because the laser does not pass through the clouds, while microwave signals from GNSS satellites or extraterrestrial quasars in the VLBI pass through every type of clouds. Hence the need to develop a model of troposphere laser beam delay was addressed the Polish-German team of scientists from IGiG and GFZ. The delay model works for different types of lasers used in satellite observations: green (532 nm), blue (423 nm), near-infrared (846 and 1064 nm) and significantly reduces systematic errors in SLR solutions. 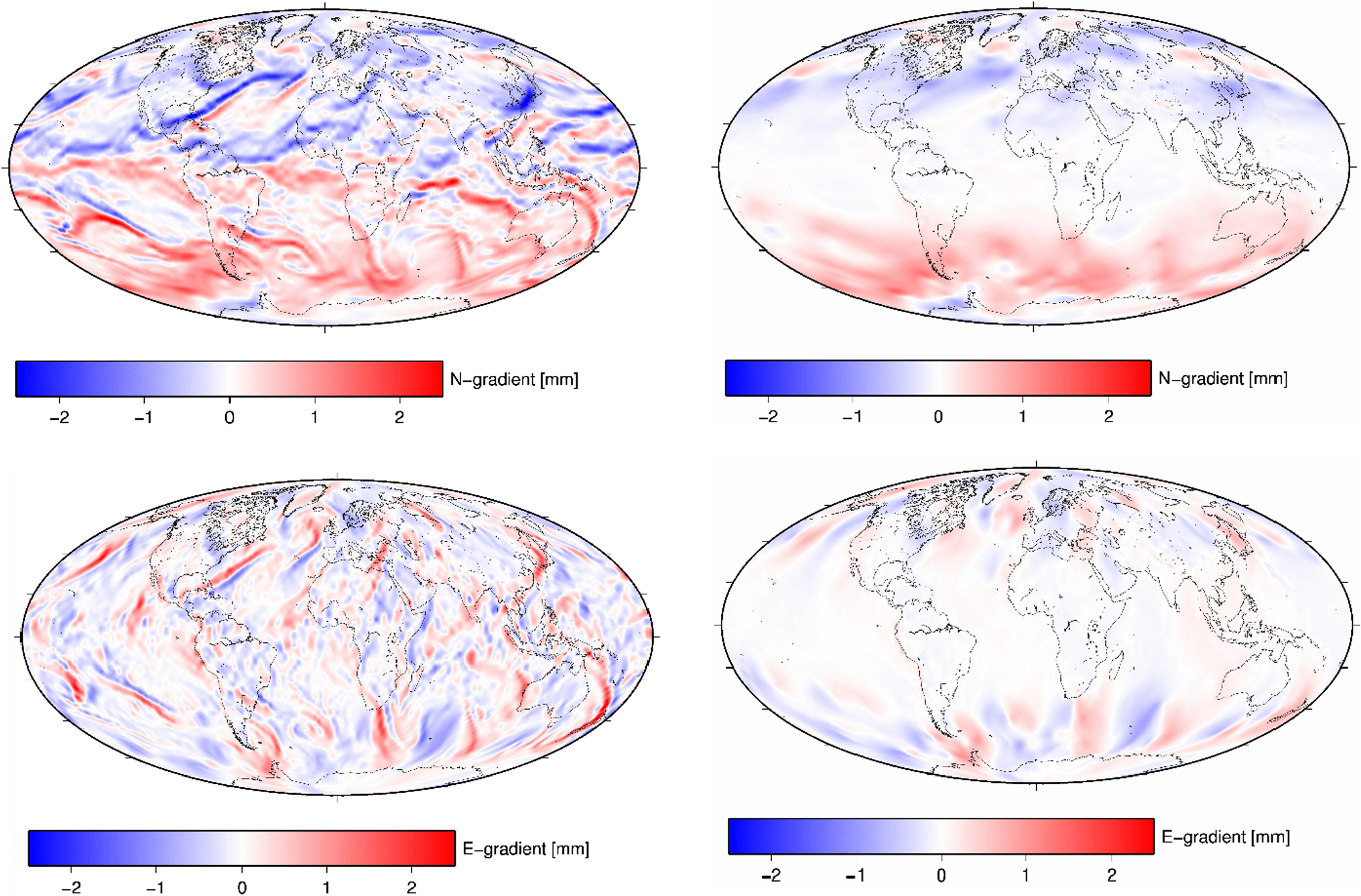 Fig.1. Comparison of horizontal tropospheric delay gradients for microwaves (e.g., GNSS, left) and laser (SLR, right) for the same hour. The upper drawings represent the northern component, and the lower ones - the eastern component - horizontal gradients.

ESA Awards
08-09-2019
The 7th International Colloquium on Scientific and Fundamental Aspects of GNSS organized by the European Space Agency (ESA) wah held on September 4-6, 2019 at ETH Zürich in Switzerland. During the plenary session crowning the Colloquium, ESA awarded the best papers presenting groundbreaking research using satellite systems, with particular emphasis on the European Galileo system. As many as three awards went to current and former PhD students and employees from IGiG: